In a post, researchers Andrey Polkovnichenko, Omer Kaspi, and Shachar Menashe of security firm JFrog said they recently found eight packages in PyPI that carried out a range of malicious activity. Based on searches on https://pepy.tech, a site that provides download stats for Python packages, the researchers estimate the malicious packages were downloaded about 30,000 times.

The discovery is the latest in a long line of attacks in recent years that abuse the receptivity of open source repositories, which millions of software developers rely on daily. Despite their crucial role, repositories often lack robust security and vetting controls, a weakness that has the potential to cause serious supply chain attacks when developers unknowingly infect themselves or fold malicious code into the software they publish.

Recently detected Android malware, some spread through the Google Play Store, uses a novel way to supercharge the harvesting of login credentials from more than 100 banking and cryptocurrency applications.

The malware, which researchers from Amsterdam-based security firm ThreatFabric are calling Vultur, is among the first Android threats to record a device screen whenever one of the targeted apps is opened. Vultur uses a real implementation of the VNC screen-sharing application to mirror the screen of the infected device to an attacker-controlled server, researchers with ThreatFabric said.

The typical modus operandi for Android-based bank-fraud malware is to superimpose a window on top of the login screen presented by a targeted app. The “overlay,” as such windows are usually called, appears identical to the user interface of the banking app, giving victims the impression they’re entering their credentials into a trusted piece of software. Attackers then harvest the credentials, enter them into the app running on a different device, and withdraw money.

Flock CEO on how data analysis makes it possible to offer better prices for insurance on drone flights and van fleets.Read More 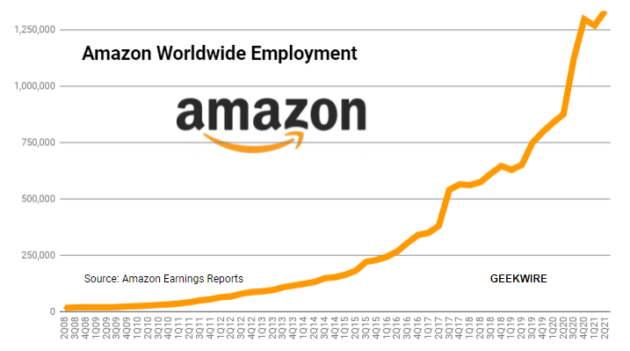 Amazon is finding it necessary to boost wages and increase its use of incentives to fill some of its open positions, resulting in higher costs in its fulfillment network.

“We certainly see stronger demand for workers,” said Brian Olsavsky, Amazon’s chief financial officer, on a conference call with reporters. “So far, we’ve had good success in hiring them with our wage and benefit package that’s pretty competitive. So we’re watching it carefully. But it’s probably one of the bigger elements of inflation in our business right now.”

Later, on a conference call with analysts and investors, Olsavsky cited the issue when answering question about fulfillment costs.

“We’re spending a lot of money on signing and incentives, and while we have very good staffing levels, it’s not without a cost,” he said.

“It’s a very competitive labor market out there,” he added, saying that “wage pressure” is “certainly the biggest contributor to inflationary pressures” across Amazon’s business.

Amazon added 64,000 employees in the June quarter, reaching a new high of 1.335 million worldwide full- and part-time employees, according to its earnings report on Thursday afternoon.

The company, which offers a $15/hour minimum wage nationally, has rapidly expanded its fulfillment and delivery network, doubling its size in the last 18 months, Olsavsky said.

The competitive labor market is one reason Amazon moved up the timeline for its annual wage increases to May rather than waiting until October, he said.

A New York Times investigation published in June described problems with Amazon’s HR systems in keeping up with the company’s growth, as well as a strategy by the company’s leaders to encourage turnover and limit upward mobility among hourly warehouse workers.

T-Mobile beat analyst expectations at the end of its second quarter, reporting $20 billion in revenue, up 13% year-over-year, and $0.78 in earnings per share. Analysts expected revenue of $19.3 billion and earnings per share of $0.53.

Shares in T-Mobile were flat in after-hours trading.

Earlier this week, T-Mobile announced it extended the range of its 5G network, now covering 305 million people. It also reported that now 165 million of those people are covered with Ultra Capacity 5G.

The mobile provider in April launched a home internet service powered by its mobile network. It costs $60 per month and reaches internet speeds of 100 Mbps.

Following its acquisition of Sprint, T-Mobile reported one-third of Sprint’s customers have been moved to its network. Approximately 80% of Sprint customer traffic is carried through T-Mobile network.

If you’ve ever stared out the window of a passenger plane, or tracked your flight as it moves across the sky on the animated video screen in front of you, you may have wondered how the pilots even know what direction to take. Skilled human flight planners take care of all that — and now they’re getting help from artificial intelligence.

In a new story this week, Fortune reports on how Seattle-based Alaska Airlines is pioneering the use of software to better predict weather and air traffic and help flight planners map out routes. The technology, called Flyways, is made by Palo Alto, Calif.-based startup Airspace Intelligence, whose website only says that it’s “the future of flight control.”

Fortune reports that Alaska has been using the AI alongside its flight planners for the past year, from the company’s new headquarters facility in SeaTac, south of Seattle, called “The Hub.” The trial produced big savings in jet fuel and lower carbon dioxide emissions, and improved on-time performance. And now Alaska will be the first airline to use the software more extensively as it rolls out the system to help dispatch all of its flights — more than 1,000 daily departures — in the lower 48 states.

“This is as game changing for aviation as Google Maps and Waze has been for driving,” Pasha Saleh, Alaska’s director of flight operations, told the magazine.

The AI helps mainly because it can create faster, custom routes that allow airlines to avoid the canned routes used to fly between navigational waypoints — what Fortune refers to as “highways in the sky.” Dispatchers must determine what route a flight is going to take by considering numerous factors, such as weather and wind forecasts, airspace restrictions, reports of turbulence, and more. The FAA-filed flight plan of every of other plane in the sky and how all of them interact also impacts travel.

Flyways, a collection of different machine learning modules linked together, can predict how weather systems will form, calculate the probable position of other aircraft in the sky and build custom routes to react to all factors. And it can do it in seconds, Fortune says, prioritizing the most fuel-saving routes across an entire fleet of aircraft.

According to the report, the startup ended up working with Alaska because the airline was the most receptive to trialing the tech. Among the biggest competitors are flight dispatch software sold by Boeing and its subsidiary Jeppesen, called JetPlanner Pro.

Amazon’s advertising business continue to grow rapidly as it is now one of the company’s key sources of revenue.

In the company’s second quarter earnings report, Amazon said its “Other” category generated $7.9 billion in sales, up a whopping 87% from the year-ago quarter, and up 14% from the first quarter of 2021.

Amazon does not break out specific financials for advertising, but its “Other” category “primarily includes sales of advertising services, as well as sales related to our other service offerings,” according to earnings report statements.

The 87% growth rate is notable; that rate in the year-ago quarter was 41%. Other Amazon businesses are not growing as quickly — sales from the online stores category grew 16% in Q2 2021, for example, and Amazon Web Services sales grew 37%.

The “Other” category is now a nearly $32 billion annual business, based on the Q2 2021 metrics. Perhaps more importantly, advertising is a high-margin business, helping boost Amazon’s profits that grew to $7.8 billion last quarter.

Amazon sales of $113B disappoint Wall Street but profits of $7.8B exceed expectations

For comparison, Amazon’s subscription services category, which includes revenue from Prime memberships, also reported $7.9 billion in revenue. That was up 28% year-over-year.

And even still, Amazon only has a 10% share of the U.S. digital ad market, according to eMarketer, though its share has been growing in recent years.

Facebook and Google — which combined have more than 50% market share of the digital ad market — are also seeing huge revenue spikes for their respective ad businesses, as are other tech giants. Microsoft-owned LinkedIn said this week that its quarterly advertising revenue surpassed $1 billion for the first time in the recent quarter, up 97%.

Axios reported Thursday that pandemic-driven trends such as the acceleration of digital adoption and a Q2 2020 ad market slowdown contributed to the recent ad sales growth.

Amazon CFO Brian Olsavsky noted that some of the year-over-year growth in advertising was due to the slowdown a year ago. “But the majority of it is all the new products and functionality that we’ve been able to roll out for customers and just more demand for advertising and higher bid rates and click through,” he said on Thursday.

Amazon generates ad revenue from an array of places, but a majority comes from charging companies to promote their products on Amazon’s online marketplace. As Amazon’s online shopping business has surged during the pandemic, so too has the advertising machine.

Olsavsky added that the advertising business is part of the company’s “flywheel,” noting that Amazon wants to help customers find products they wouldn’t have seen otherwise.

Amazon also makes ad money from its streaming media platforms such as Twitch or Fire TV. 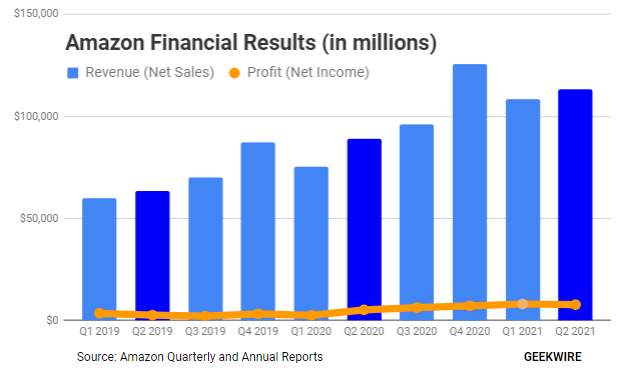 Amazon posted net sales of 113.1 billion for the second quarter, up 27%, but fell short of Wall Street expectations, sending its stock down 5% in after-hours trading.

The result was within the range of the company’s previously issued guidance of net sales between $110 billion and $116 billion. However, Wall Street analysts had expected Amazon to report overall net sales of $115 billion, on average, a 29% increase year-over-year. 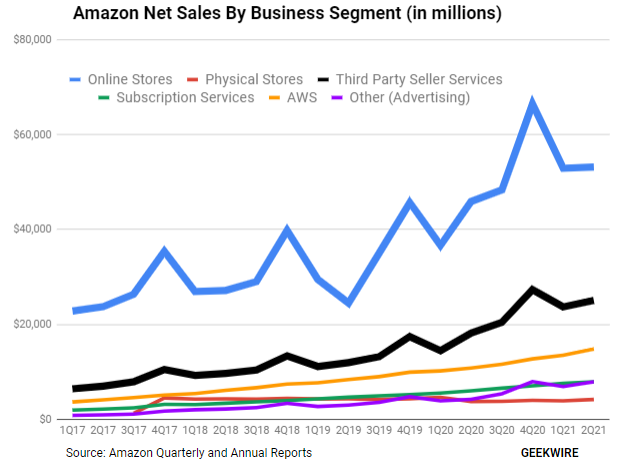 Brian Olsavsky, the company’s chief financial officer, addressed the slowdown in online sales on a conference call with reporters.

About mid-May of last year, the growth rate for the business jumped into the 35 to 45% range from what had been about 20 to 21% growth rate pre-pandemic. So we’re starting to lap that year-over-year. And that’s why you see some of the growth rates coming down. Once we lap May 15, we see the business growing in the mid-teens percent. It’s essentially a combination of lapping last year’s COVID strength, and also the additional mobility that we’re seeing among our customers especially in the United States and Europe, people getting out more, doing other things besides shopping.

Jassy spoke to the vital services provided by the company’s consumer business and Amazon Web Services during the pandemic, and thanked the company’s employees, saying he is “very excited to work with you as we invent and build for the future.”